It has today been announced that Oceania Kung Fu Wushu Federation & Kung Fu Wushu Australia President, Walt Missingham, has been unanimously elected, at the 15th International Congress of the International Wushu Federation, as one of five new Vice Presidents for the 2019 to 2023 term.
Walt’s election is the highest international office, in kung fu/wushu,  ever achieved by an Australian. Walt commented “it is of course a great honor to be so positively endorsed by my international colleagues, I take the opportunity to thank all of our team in both Australia and Oceania, without their dedication and support this achievement would not have been possible. I will be conducting a more comprehensive interview about all that this means for Australia and Oceania when I return home” 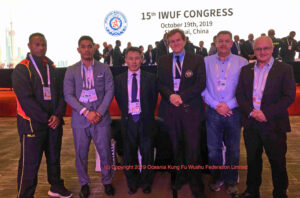